Earlier in the year we learned about the Pilgrims who came to Massachusetts in 1620.  They were Puritans who wanted to leave the Church of England.

Another group of Puritans also sought religious freedom.  Led by John Winthrop, the group formed the Massachusetts Bay Colony.  They settled in New England in 1630.  These Puritans wanted to freely practice their religious beliefs in their new home.

They rugged geography of New England did not make the Puritans give up their plan.  The soil was rocky, and winters could be harsh.  But there were also vast forests and clean water.  The winter cold killed insects and germs that caused disease.  Colonists in New England often lived longer than people in other regions.

Massachusetts had a more democratic government than most countries in Europe.  At first, only Puritan men could vote.  As time passed, all men who owned land could vote.  The colonists met at town meetings to solve local problem.  They made decisions by majority rule.  They was the first truly democratic form of government in the colonies.  Settlers elected representatives to the colony’s lawmaking body.  John Winthrop was elected governor 12 times between 1630 and 1649. 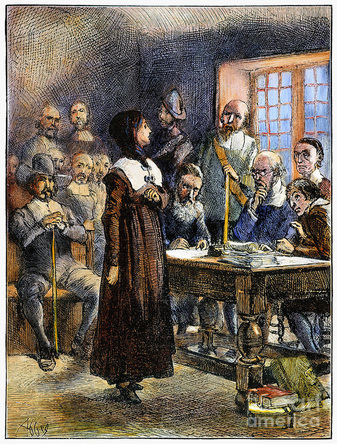 From its start, Rhode Island offered people religious freedom.  In 1631, a young minister named Roger Williams began to criticize the Puritan leaders of the Massachusetts Bay Colony.  He thought that government and religion should be separate.  These leaders forced him to leave the colony in 1635.

Williams spent the winter with some American Indians.  In 1636, he started a town called Providence.  It later became the capital of Rhode Island.  Rhode Island welcomed people with different religious beliefs.

Puritan Anne Hutchinson also lived in the Massachusetts Bay Colony.  She spoke out against some Puritan practices and beliefs.  In 1637, she was put on trial for her religious ideas.  The court found her guilty and forced her to leave the colony.  She, too, moved to what become part of Rhode Island.  There she could practice her beliefs.

Rhode Island was one of the most democratic colonies.  At first, most men could vote for the colony’s governor and local officials.  Later on, only men who owned property could vote.  But voters did not have to practice a certain religion.
Information and Pictures from the Teacher's Curriculum Institute